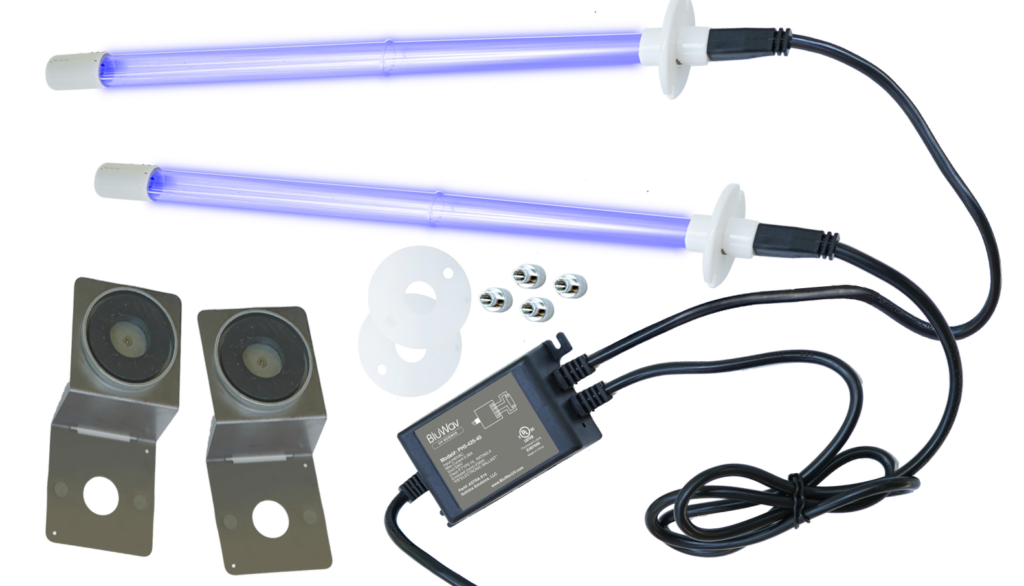 Solintra’s Astra X14² is the HVAC manufacturer’s choice when it comes to providing a safe, reliable, and effective germicidal light sterilization components to your AC unit. Germicidal light disinfection has been widely used commercially for decades as a means to sterilize equipment, rooms, air and water – now it’s available as a simple and affordable unit for your home’s AC unit.

Installed in the air handling unit of a residential AC system, the Astra X14² operates continuously to kill disease-causing microorganisms and contaminants that reside on the cooling coils, interior surfaces, and condensate pan in a safe manner. Keeping these areas free of surface-fouling contaminants ensures a more efficiently operating AC unit, saving you time and money while keeping you and your family safe from these pathogens.

UV-C germicidal light is not visible to humans, but it is a very effective treatment for disinfection by using high energy photons focused at 254 nm which causes damage to the DNA inherent in the cells that make up all living things. By destroying the DNA, the life-cycle of the pathogens is broken resulting in cleaner, safer air in your home. 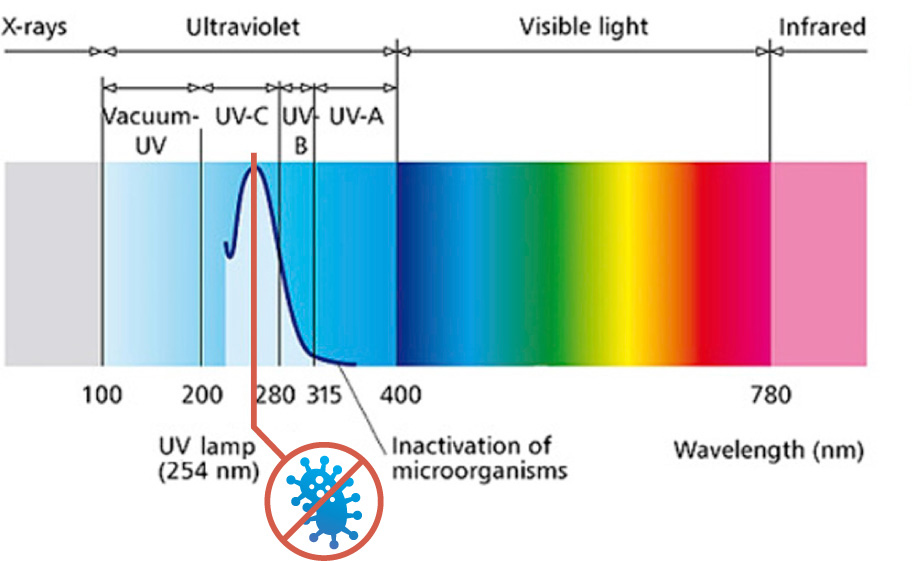 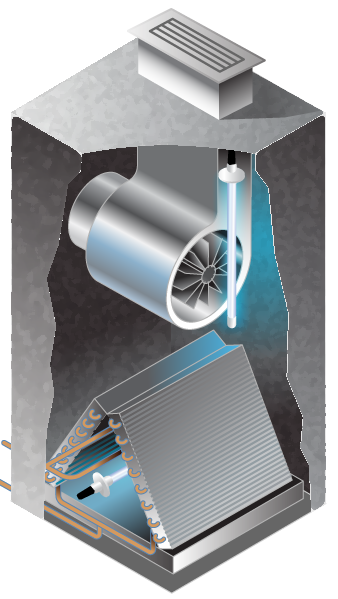 UV germicidal light disinfection has been widely used commercially for decades as a means to sterilize equipment, rooms, air and water. Now germicidal lights like the BluWav ASTRA X-14 are available as a simple and affordable unit for your home’s AC unit. UV-C is a very effective treatment for disinfection by using high energy photons focused at 254 nm which causes damage to the DNA inherent in the cells that make up all living things. By destroying the DNA, the life-cycle of the pathogens is broken resulting in cleaner, safer air in your home. Learn more

How long does it take ultraviolet light to kill viruses?

UV-C has a proven track record of eliminating or reducing a range of microorganisms. How long it takes to neutralize a virus in the air depends on several variables including the concentration of airborne pathogens, the size of the HVAV system, and the quality and size of the germicidal light. Because air recirculates within a home HVAC system, every pass by the UV fixtures disinfects more of what is in the air. Though airborne pathogens may not receive a lethal UV dosage on the first pass, they are more and more likely to receive a lethal dose with each subsequent pass by the UV system. Learn more

What is UV-C or germicidal light? 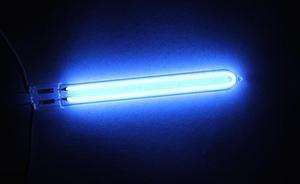 UV light is electromagnetic radiation with wavelengths shorter than visible light but longer than X-rays. UV is categorized into several wavelength ranges, with short-wavelength UV (UV-C) considered “germicidal UV”. Wavelengths between about 200 nm and 300 nm are strongly absorbed by nucleic acids. The absorbed energy can result in defects including pyrimidine dimers. These dimers can prevent replication or can prevent the expression of necessary proteins, resulting in the death or inactivation of the organism. This process is similar to the effect of longer wavelengths (UV-B) producing sunburn in humans. Microorganisms have less protection against UV and cannot survive prolonged exposure to it.

UV-C light is weak at the Earth’s surface since the ozone layer of the atmosphere blocks it. UVGI devices can produce strong enough UV-C light in circulating air or water systems to make them inhospitable environments to microorganisms such as bacteria, viruses, molds, and other pathogens. UVGI can be coupled with a filtration system to sanitize air and water.

Ultraviolet germicidal irradiation (UVGI) is a disinfection method that uses short-wavelength ultraviolet (UV-C) light to kill or inactivate microorganisms by destroying nucleic acids and disrupting their DNA, leaving them unable to perform vital cellular functions. UVGI is used in a variety of applications, such as food, air, and water purification.

The application of UVGI to disinfection has been an accepted practice since the mid-20th century. It has been used primarily in medical sanitation and sterile work facilities. Increasingly, it has been employed to sterilize drinking and wastewater since the holding facilities are enclosed and can be circulated to ensure a higher exposure to the UV. UVGI has found renewed application in air purifiers.

A UVGI system is designed to expose environments such as water tanks, sealed rooms and forced air systems to germicidal UV. Exposure comes from germicidal lamps that emit germicidal UV at the correct wavelength, thus irradiating the environment. The forced flow of air or water through this environment ensures exposure.

The effectiveness of germicidal UV depends on the length of time a microorganism is exposed to UV, the intensity and wavelength of the UV radiation, the presence of particles that can protect the microorganisms from UV, and a microorganism’s ability to withstand UV during its exposure.

In many systems, redundancy in exposing microorganisms to UV is achieved by circulating the air or water repeatedly. This ensures multiple passes so that the UV is effective against the highest number of microorganisms and will irradiate resistant microorganisms more than once to break them down.

How does UV-C inactivate microorganisms?

The degree of inactivation by ultraviolet radiation is directly related to the UV dose applied to the water. The dosage, a product of UV light intensity and exposure time, is usually measured in microjoules per square centimeter, or equivalently as microwatt seconds per square centimeter (μW·s/cm2). Dosages for a 90% kill of most bacteria and viruses range between 2,000 and 8,000 μW·s/cm2. Larger parasites such as cryptosporidium require a lower dose for inactivation. As a result, the U.S. Environmental Protection Agency has accepted UV disinfection as a method for drinking water plants to obtain cryptosporidium, giardia or virus inactivation credits. For example, for a 90% reduction of cryptosporidium, a minimum dose of 2,500 μW·s/cm2 is required based on the U.S. EPA UV Guidance Manual published in 2006.

UVGI can be used to disinfect air with prolonged exposure. In the 1930s and 40s, an experiment in public schools in Philadelphia showed that upper-room ultraviolet fixtures could significantly reduce the transmission of measles among students. In 2020, UVGI is again being researched as a possible countermeasure against the COVID-19 pandemic.

Disinfection is a function of germicidal light intensity and time. For this reason, it is in theory not as effective on moving air, or when the lamp is perpendicular to the flow, as exposure times are dramatically reduced. However, numerous professional and scientific publications have indicated that the overall effectiveness of UVGI actually increases when used in conjunction with fans and HVAC ventilation, which facilitate whole-room circulation that exposes more air to the UV source. Air purification UVGI systems can be free-standing units with shielded UV lamps that use a fan to force air past the UV light. Other systems are installed in forced air systems so that the circulation for the premises moves microorganisms past the lamps. Key to this form of sterilization is placement of the UV lamps and a good filtration system to remove the dead microorganisms. For example, forced air systems by design impede line-of-sight, thus creating areas of the environment that will be shaded from the UV light. However, a UV lamp placed at the coils and drain pans of cooling systems will keep microorganisms from forming in these naturally damp places.
CLICK HERE for more information on UV-C and germicidal light.